Inactive
Sebastian Pigott (born February 14, 1983) is a Canadian singer and actor, best known for appearing on numerous television series, including Murdoch Mysteries and Revenge, and for participating on the sixth season of Canadian Idol.

He played Brad in Saw 3D.

Sebastian Pigott was born in Toronto, Ontario. Throughout his career, he appeared on various network television shows and feature films, such as The Listener, Heartland, The Border, and Deadliest Sea. His most prominent role to date has been that of barista Kai Booker on the second season of CBC Television's Being Erica, for which he and his brother, Oliver, wrote the songs Alien Like You and Hard To Go. Pigott has also been featured in the TV series Haven in the episode called Consumed. He and his brother have created a band called Pigott Brothers and have released their debut album called Pigottry in 2009. Their second album, The Age Of Peace, was released in the fall of 2012. 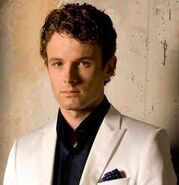 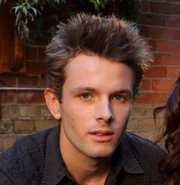 Retrieved from "https://sawfilms.fandom.com/wiki/Sebastian_Pigott?oldid=57706"
Community content is available under CC-BY-SA unless otherwise noted.