$164,874,275
Saw III is a horror film directed by Darren Lynn Bousman and written by James Wan and Leigh Whannell. It was the third film in the Saw franchise and was released on October 27, 2006.

Following the ending of Saw II, Detective Eric Matthews is trapped in the dilapidated bathroom after having been chained to a pipe by Amanda Young. However, he eventually manages to free himself from his shackle by breaking his foot with the lid of a toilet tank.

Six months later, Lieutenant Daniel Rigg and the detectives Allison Kerry and Mark Hoffman find another victim of the Jigsaw Killer in a trap set up at an elementary school. The victim, Troy, had to rip out several chains pierced through various parts of his body to escape a nail bomb. However, the trap was inescapable as the exit door was welded shut, leading Kerry to assume that someone other than John Kramer was responsible for Troy's death.

Later on, Kerry herself is abducted from her apartment and wakes up in a trap on her own. She has one minute to retrieve a key from a beaker filled with acid and deactivate the device hooked into her chest. However, even though she manages to obtain the key in time, her trap has been manipulated, just like Troy's, and subsequently kills her as it tears her rib cage apart.

Shortly afterward, Amanda Young abducts the surgeon Dr. Lynn Denlon and takes her to her and John Kramer's hideout in an abandoned meatpacking plant. John, who has become bedridden due to his cancer, gives her an ultimatum and forces her to keep him alive until another victim manages to pass a series of tests. Amanda locks a collar around her neck to make sure she follows the rules. This collar is connected to John's heart monitor and will detonate if he dies or Lynn moves out of range.

Meanwhile, the other victim, Jeff, wakes up inside a crate somewhere else inside the plant. Jeff is tested because he lost his son, Dylan, in a car accident three years earlier and has become obsessed with his feelings of vengeance against the people he deemed responsible. An audiotape left by Jigsaw informs him that he will have to undergo several tests, which will ultimately lead him to "the man responsible for the loss of his child."

Soon afterward, Jeff finds a naked woman, Danica Scott, chained up in a freezer room. Danica was the only witness of his son's death but had refused to testify against the drunk driver, resulting in the latter only receiving a light sentence. As the game begins, her body is sprayed with ice-cold water at regular intervals, which quickly freezes due to the low temperature. Jeff can either let her die or save her by obtaining a key positioned behind several frozen metal bars. Eventually, Danica manages to convince him to help her. However, even though he manages to retrieve the key, Danica ultimately freezes to death before Jeff can unlock her chains.

In his second test, Jeff encounters Halden, the judge who presided over the case of Dylan's death. He is chained to the bottom of a large vat, which slowly fills with liquefied pig intestines. Again, Jeff has the choice to let him die or to retrieve the key to Halden's shackle by burning all of his son's possessions in an incinerator. After some initial hesitation, Jeff finally activates the incinerator and saves the judge with the key.

Eventually, Jeff and Halden reach the room of Jeff's third test, where they find the drunk driver, Timothy Young, who is strapped to a device that will slowly twist his limbs and his head. Despite his hatred and his desire for vengeance, Jeff ultimately tries to save Timothy and retrieves a key connected to the trigger of a shotgun. However, as he does, Halden, who accidentally walked into the line of fire, is killed by a shot. In the end, Jeff tries to deactivate Timothy's trap but is too late to save him and watches as the contraption breaks Timothy's neck.

Meanwhile, Dr. Lynn Denlon decides to perform brain surgery on John to keep him alive. While undergoing the operation, he hallucinates and professes his love for another woman, whom Amanda mistakes for Lynn. Jealous of Lynn and distressed by John's impending death, Amanda cuts herself to deal with her emotions. Several flashbacks show how she became John's apprentice after surviving one of his games. Thereby, it is also revealed that she assisted him in setting up the game in the bathroom of the first film and later returned to kill Adam Stanheight.

Amanda finds a letter in her desk drawer after the surgery, which distresses her even more. When she eventually returns to John and Lynn to tell them that Jeff had finished his third test, John tells her to free Lynn from her collar. However, Amanda refuses to do so and holds her at gunpoint. While John tries to calm her down and convince her to let Lynn go, Amanda confesses that she does not believe in John's philosophy. Thereby, she also reveals that she had manipulated Troy's and Kerry's traps and left Eric Matthews for dead after the two of them had engaged in a brutal fight after he escaped from the bathroom.

Despite John's warnings that her life depended on Lynn, Amanda shoots her in the back just as Jeff enters the room. It is then revealed that Lynn and Jeff were husband and wife, unknown to Amanda. Therefore, Jeff fatally shoots her with a gun he found earlier during his game. As Amanda succumbs to her wounds, John reveals that Lynn's test to keep someone alive was meant for Amanda as well, as he had already known about her manipulated games.

Following Amanda's death, Jeff aims his gun at John and tries to shoot him. However, he has no bullets left in the gun. John manages to calm him down and promises to call an ambulance for Lynn in exchange for one final test. Jeff can either kill John or forgive him for the pain he had caused him and his wife to suffer. Although Jeff tells John that he forgives him, he picks up a buzz saw and slashes his throat. Subsequently, the door of the room automatically slams shut behind him. John pulls out a tape recorder and plays his final message for Jeff. The tape informs Jeff that he failed his test by killing John and reveals that his daughter, Corbett, has been abducted, with John being the only person to know about her whereabouts. Jeff has to play another game to save her before she runs out of air. The tape ends as John dies from his injuries, and Lynn's collar promptly detonates and kills her, leaving Jeff trapped in the sickroom.

Despite the financial success of Saw II, Darren Lynn Bousman, James Wan, and Leigh Whannell initially turned down the offer to work on Saw III. However, they changed their minds when producer Gregg Hoffman unexpectedly died a few weeks after the release of Saw II and decided to make Saw III in dedication to him.

Unlike the first two installments, Saw III was planned to become a more emotional film, primarily focusing on the relationship and character development of Jigsaw and Amanda Young. As with the previous movies, the complete script was only given to the actors and crew members involved in the film's ending. However, Darren Lynn Bousman stated that it was not their primary goal to deliver yet another twist ending as in the first movies. Instead, they wanted to fully concentrate on the emotional aspects of the climax rather than any surprising reveals.

Saw III was also granted a higher budget of $10 million. Instead of rebuilding the bathroom set from scratch, the crew borrowed the set used for Scary Movie 4, which parodied the first two films, to keep the costs low. The principal photography took place at Toronto's Cinespace Film Studios from May 8, 2006, to late June.

Almost all the shifts from one place to another were not made using digital effects. Instead, the transitions were shot on the spot, which was a technique that Darren Lynn Bousman already used for Saw II. This way, he wanted to maintain the fast pace and rhythm, which were essential to the first two films' visual styles.

The opening scene of Troy's trap was shown at San Diego Comic-Con International on July 21, 2006. The same clip was also planned to be presented before the opening of Crank in theaters on September 1, 2006. However, the MPAA did not allow it. On October 10, 2006, Tobin Bell, Shawnee Smith, and Darren Lynn Bousman appeared at Spike TV's Scream Awards to promote the film, and the clip of Troy's trap was shown again.

Lionsgate's president of theatrical marketing, Tim Palen, came up with the idea to make 1,000 posters with a small amount of Tobin Bell's blood mixed with the red printing ink. The posters were sold for $20, the first being auctioned off. All the proceeds from the auctioned poster were donated to the Red Cross. Lionsgate also held the third annual "Give Til It Hurts" blood drive for the Red Cross and collected 23,493 pints of blood.

The film was finally released in the United States, Canada, and the United Kingdom on October 27, 2006. It was released in Australia on November 2, 2006, and on January 4, 2007, in New Zealand. Executive producer Daniel Jason Heffner said that the film had to be cut and altered seven times to obtain the "R" rating. According to Darren Lynn Bousman, the Motion Picture Association of America was less concerned with the film's graphic violence rather than emotional torture that might disturb the audience.

Saw III was later released on DVD and Blu-ray by Lionsgate Home Entertainment on January 23, 2007. It topped the home video charts in the United States and Canada with 1.6 million units sold on its first day and finished the week with 2.5 million units sold. The "Unrated DVD" was also released that day and featured a 113-minute cut, including more explicit splatter scenes. A 120-minute-long Director's Cut was released on October 23, 2007, to coincide with the theatrical release of Saw IV on October 26. It also included an extended, slightly altered ending.

Saw III was the highest-grossing film in the franchise, earning $80,238,724 at the box office in the US and $164,874,275 worldwide, despite receiving primarily unfavorable critics. It received a rating of 28% from Rotten Tomatoes, based on 87 reviews, and a score of 48 out of 100 from Metacritic, based on 16 critics. Most of the criticism regarded the extensive use of flashbacks throughout the film, which was deemed unnecessary and was said to slow down the film's pace. Furthermore, several details of the plot were considered unbelievable and unrealistic, such as the ability of John and Amanda to set up the traps.

The soundtrack of Saw III was composed by Charlie Clouser, who had already been responsible for the soundtrack of the previous films. It was released on October 24, 2006, by Artists Addiction Records. The track "Monochrome" from Helmet was the lead-off single for the album.

1. This Calling - All That Remains

3. Eyes of the Insane - Slayer

7. Drilled a Wire Through My Cheek - Blue October

9. Burn it Down - Avenged Sevenfold

11. Dead Underground - Opiate For The Masses

12. Suffocating Under Words of Sorrow (What Can I Do) - Bullet for My Valentine 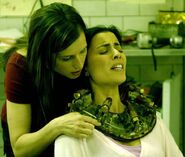 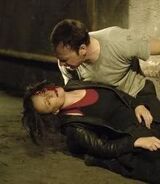 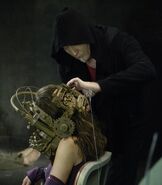 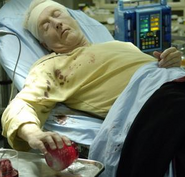