$152,925,093
Saw II is a horror film written and directed by Darren Lynn Bousman and co-written by Leigh Whannell. It was the second film in the Saw franchise and was released on October 28, 2005.

Michael Marks, a police informant, wakes up with a spike-filled mask locked around his neck. A videotape informs him that he has one minute to retrieve the key from behind his right eye with a scalpel. Michael, however, cannot bring himself to withstand the pain and is killed when the mask closes on his head. When Michael's corpse is found shortly afterward, his employer, Detective Eric Matthews, is called to the crime scene by Detective Allison Kerry. The latter discovered a message left for him by the Jigsaw Killer.

Initially reluctant to become involved in the investigation, Eric quickly manages to locate Jigsaw's hideout at the abandoned Wilson Steel Plant and therefore decides to join Kerry and Sergeant Daniel Rigg as they raid the plant with a SWAT team. They find the killer, John Kramer, severely weakened by his cancer disease. However, as the officers are about to arrest him, John reveals that he had already planned his apprehension and shows them a set of surveillance monitors. On these monitors, Eric and the others witness eight people, including Daniel Matthews, Eric's son, and Amanda Young, the only known survivor of one of John's games, who are all trapped inside a big house. While trapped there, they breathe in a deadly nerve agent and have two hours to find syringes with the antidote hidden all around the house. John assures Eric that he will see his son again in a "safe and secure state" if he agrees to talk with him alone until the two hours are over. Pressured by Kerry, Eric reluctantly agrees to John's ultimatum to buy time for the police tech team to arrive and track the signal from the video feed.

The eight victims in the house - Daniel, Amanda, Xavier Chavez, Jonas Singer, Addison Corday, Laura Hunter, Obi Tate, and Gus Colyard - find an audiotape left by Jigsaw, informing them about the nerve gas and the antidotes. One antidote is locked in a safe in the room where they all initially woke up. According to Jigsaw's message, the combination required to open it is "in the back of their minds," while the correct order of the numbers is found "over the rainbow." Besides the tape, the prisoners also find a key and a warning message, which tells them not to use the key to open the room's door. Xavier, however, refuses to heed the warning and uses the key, thereby causing Gus to be shot by a booby trap connected to the lock.

Following his death, the group makes their way to the basement, where another tape reveals that Obi helped Jigsaw abduct the others. Pressured by Xavier, Obi crawls into a furnace to retrieve two antidotes but inadvertently activates the oven and is burned alive. As the remaining prisoners search the rest of the house, Jonas leads them to another room upstairs. Another tape tells them that one antidote is hidden behind a steel door, and the key to open it lies somewhere in a pit filled with thousands of used syringes. This test is meant for Xavier, who is a drug dealer. However, instead of accomplishing his task, he throws Amanda into the pit. Although she manages to obtain the key, Xavier fails to unlock the door in time and subsequently abandons the group out of frustration.

Meanwhile, John passes the two hours with an idle and cryptic conversation with an increasingly frustrated Eric. He eventually talks about his cancer diagnosis and his failed suicide attempt, which led to his new appreciation for his life. With his remaining time of life, John hopes to inspire the same appreciation in others by testing their will to live. As he explains his moral ideals to Eric, the tech team finally arrives. At Kerry's suggestion, Eric tries to provoke John by destroying several documents, blueprints, and sketches around the area. John, however, is barely impressed and reveals that all of the victims in the house, except for Daniel, have all been innocently framed by Eric for various crimes they did not commit. Furthermore, he warns him that Daniel's life will be endangered once the other prisoners learn about his connection to Eric.

In the house, Xavier returns to the first room where they initially woke up and discovers a colored number written on the back of Gus' neck. Thereby, he realizes that every prisoner has one number of the safe's combination written on their neck. Desperate to get his hands on the antidote, he kills Jonas in a fight and begins to hunt down the others. Meanwhile, Laura collapses and eventually succumbs to the nerve agent. Additionally, Amanda and Addison abandon Daniel after finding a photo of him and Eric. Amanda, however, returns after finding Jonas' body. As the two of them try to find a place to hide from Xavier, Addison finds a room with another antidote locked up inside a glass box. However, as she puts her hand through a hole in the box to grab it, her arms are trapped in the razor blade-lined sockets. Moments later, Xavier finds her but leaves her to die after reading her number.

Amanda and Daniel return to the first room and find a hidden tunnel, which leads them to the dilapidated bathroom from the first film, which still contains the severed foot of Dr. Lawrence Gordon and the decomposing bodies of Adam Stanheight and Zep Hindle. Weakened by the gas, Daniel passes out moments before Xavier finds them. Amanda points out that he cannot read his number without her help, hoping to prevent Xavier from harming them. However, Xavier refuses her help and instead cuts off the skin from his neck before approaching them to get their numbers. At this moment, Daniel, who merely faked his collapse, takes him by surprise and slashes his throat with a hacksaw.

At the Wilson Steel Plant, Eric brutally assaults John after witnessing Xavier's pursuit of Daniel and forces him to take him to the house. John agrees to do so but demands to go there alone with Eric. The latter agrees, and both men leave the building in a hidden elevator. At the same time, the tech team traces the video feed to another house. However, as Rigg and his men arrive there, they realize that they had merely watched a recording of the game the entire time, while the game itself had already been over before they raided Jigsaw's hideout. Just as they realize Jigsaw's deception, the time expires, and a large safe opens at the Wilson Steel Plant. Thereby, Kerry finds Daniel, who has been trapped inside the safe the entire time.

Unaware of this revelation, Eric arrives at the actual location of the game and enters the house alone. He eventually finds the bathroom but is attacked and subdued by a pig-masked figure. He finds himself shackled by the ankle to a pipe upon waking up. An audiotape lying next to him reveals that Amanda Young has become John's accomplice after surviving her own game and merely pretended to be a victim in the house. Furthermore, the tape tells him that Amanda will carry on John's work after his death and that he is supposed to be Amanda's first test subject. As the recording ends, Amanda appears outside the room and seals the bathroom door with the words "Game Over," leaving Eric to die. Outside, John, still sitting in Eric's van, smiles as his plan was successful.

Following the successful opening weekend of Saw in 2004, Saw II was immediately green-lit. Music video director Darren Lynn Bousman had written a script for a movie called The Desperate and tried to find a studio for the production. Eventually, camera operator David Armstrong, who had already worked on the first Saw film, suggested showing it to producer Gregg Hoffman. After showing it to his partners, Mark Burg and Oren Koules, they decided to change the script of The Desperate and turned it into Saw II. Two months later, Bousman was flown to Toronto to direct the movie.

Leigh Whannell, who already wrote the first film's screenplay, polished the script to fit into the Saw universe and served as executive producer alongside James Wan. Besides them, all of the other crew members from the original film returned, including David Armstrong, editor Kevin Greutert, and composer Charlie Clouser.

Saw II was also granted a higher budget of $4 million. The first shot, which involved shooting police cars and a SWAT van driving around the industrial docklands outside the soundstage, was filmed in Toronto on April 29, 2005. After two months of pre-production, principal photography took place at Toronto's Cinespace Film Studios from May 2, 2005, to June 6, 2005.

Only the crew members and actors involved in the ending were given the whole script to keep it a secret. Additionally, everyone involved in the film had to sign confidentiality agreements, which required them not to reveal any details about the plot. The ending was filmed on May 25 and 26, while the music and sound were recorded in July. By September 9, Saw II was eventually finished. Deluxe provided post-production services while C.O.R.E. Digital Pictures performed the visual effects.

Saw II was released in New Zealand, the United States, and the United Kingdom on October 28, 2005, and in Australia on November 17, 2005. The original teaser poster, which showed two bloody, severed fingers, was rejected by the Motion Picture Association of America. Since the poster was already released and managed to "slip by" the MPAA, they issued a release, stating the poster was not approved and was unacceptable. Lions Gate Entertainment removed it from their websites. Instead, the image was used as the cover for the film's soundtrack, released on October 25, 2005, by Image Entertainment. Lionsgate held the second annual "Give Til It Hurts" blood drive for the Red Cross and collected 10,154 pints of blood.

On February 14, 2006, the film was released on DVD, VHS, and Universal Media Disc by Lionsgate Home Entertainment. 2.5 million units of the DVD were sold on the first day. It went on to sell 3.9 million units its first week, becoming the fastest-selling theatrical DVD in Lionsgate's history. On October 24, 2006, an Unrated Special Edition was released, followed by an unrated Blu-ray edition with various special features on January 23, 2007.

Like the first film, Saw II was a financial success, earning $87,039,965 at the box office in the US and $147,748,505 worldwide. Similar to its predecessor, the film received a mixed critical reception. It received a rating of 36% from Rotten Tomatoes, based on 117 reviews, and a score of 40 out of 100 from Metacritic, based on 28 critics. While the story was generally criticized, most critics praised Tobin Bell's performance as the Jigsaw Killer.

The soundtrack of Saw II was composed by Charlie Clouser, who had already been responsible for the first film's soundtrack, and was released on October 25, 2005, by Image Entertainment. It also contained a music video directed by Darren Lynn Bousman. 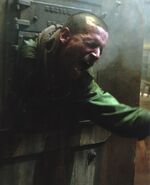