View source
watch 01:40
Saw: Trailer
Do you like this video?
Play Sound

$103,096,345
Saw is a horror film written and directed by James Wan and co-written by Leigh Whannell. It was the first film in the Saw franchise and was released on October 29, 2004.

Freelance photographer Adam Stanheight and oncologist Dr. Lawrence Gordon awaken in a dilapidated bathroom, chained by their ankles to pipes on the opposite sides of the room. Between them lies a corpse, holding a revolver and a microcassette recorder. Both men find a tape in their pockets, and Adam quickly retrieves the tape player. Upon playing his cassette, a distorted voice urges him to escape. In contrast, Gordon's recording tells him to kill Adam by 6:00, as otherwise, his wife, Alison, and his daughter, Diana, will be executed. Adam then finds a bag containing two hacksaws inside a toilet tank. However, as they try to cut through their chains, Adam's saw breaks eventually. Thereby, Gordon realizes the saws are not meant to cut through their chains. Instead, they are supposed to cut off their feet, leading him to conclude that they were abducted by a wanted serial killer known as Jigsaw. As he tells Adam about the killer, who tests his victims' will to live by forcing them to fight for their lives in his deadly games, Gordon admits that he was a former suspect in the case.

Flashbacks reveal how the doctor got involved in the homicide investigation in the first place. Five months earlier, Gordon had introduced his medical students to John Kramer, a terminal cancer patient, when he was visited by Detective David Tapp and Detective Steven Sing. They had found his penlight at the scene of Jigsaw's latest game. Although Gordon's alibi cleared him, he agreed to listen to the testimony of Amanda Young, a heroin addict and the only known survivor of one of Jigsaw's games.

Shortly after Gordon was allowed to leave the police station, Tapp and Sing discovered Jigsaw's hideout in an abandoned mannequin factory after finding a clue on a videotape used by the killer during Amanda's game. Upon their arrival, they found Jigsaw and took him by surprise, saving another victim named Jeff Ridenhour in the process. However, the killer slashed Tapp's throat with a hidden blade, allowing him to escape custody. While pursuing him, Detective Sing accidentally triggered a booby trap and was subsequently killed by four shotguns.

In the present, Alison and Diana Gordon are held captive in their apartment while their captor watches Adam and Dr. Gordon via a hidden camera. Simultaneously, the house is observed by David Tapp, who suffered a mental breakdown after Sing's death and was subsequently discharged from the Metropolitan Police Department. However, because of his feelings of guilt, he decided to continue the investigation on his own to end Jigsaw's games for good. Therefore, he rented a run-down flat across the street from Gordon's apartment as he still considers him the primary suspect.

Meanwhile, Gordon finds a hidden box in the bathroom. It contains two cigarettes, a lighter, and a one-way cellphone. As time passes by, he and Adam both remember how they were abducted by a mysterious figure with a pig mask the night before, when suddenly, the phone rings. As Gordon answers the call, Alison, held at gunpoint by her captor, warns her husband not to trust Adam, stating that the latter knew everything about him. When Gordon confronts his fellow prisoner with Alison's warning, Adam eventually admits that Tapp had hired him to spy on the doctor. He shows him the photos he previously took of him, as he found them in the same bag as the hacksaws. Upon doing so, Adam reveals his knowledge of Gordon having an affair with one of his medical students, Carla, whom the doctor had met at a hotel on the night of his abduction. However, he realizes that one of the photos was not taken by him. It shows Alison and Diana's captor standing at a window in Gordon's apartment. Upon looking at the picture, Gordon identifies the man as Zep Hindle, an orderly from the hospital where he worked.

Seconds later, the clock strikes six, marking the end of their game. As Gordon had not managed to kill Adam in time, Zep prepares himself to execute Gordon's family and calls the doctor so Alison can inform him about his failure. However, Alison frees herself from her restraints and desperately fights with her captor. The struggle attracts Tapp's attention, who storms into the apartment and opens fire on Zep, thereby giving Alison and Diana the chance to escape. Zep flees the scene and sets out for the bathroom to kill Gordon. Tapp pursues his opponent to an underground tunnel network where the bathroom is located and brutally batters him, but is ultimately shot in the chest and succumbs to his wound.

Meanwhile, Gordon suffers a mental breakdown as he is unaware of his family's survival. In a last desperate attempt to save them, he uses his hacksaw to cut off his foot. Then, he takes the gun from the lifeless body in the middle of the room and shoots Adam, who collapses immediately. Moments later, Zep enters the bathroom and prepares himself to shoot Gordon but is attacked by Adam, who survived the gunshot. After a brief fight, Adam gains the upper hand and bludgeons Zep to death with the toilet tank lid.

Gordon, albeit severely injured, promises to get help and crawls out of the room. Once he is alone, Adam searches Zep's body for a key to his shackle but finds another audiotape instead. Upon playing the recording, he finds out that Zep himself was just another victim of Jigsaw. The latter had injected him with a slow-acting poison and ordered him to capture and kill Gordon's family if the doctor failed his test. In return for that, Zep would have been given the antidote.

When the tape ends, the corpse in the middle of the room arises and is revealed to be John Kramer, the real Jigsaw Killer, who began his murder series after being diagnosed with an inoperable brain tumor. He tells Adam that the key to his chain is in the bathtub behind him. However, it went down the drain when Adam initially scrambled from the tub. Horrified by these events, Adam grabs Zep's gun and tries to shoot Kramer but is incapacitated by an electric shock. Deciding that Adam did not learn his lesson, Kramer turns off the lights and closes the door, leaving the screaming young man to die.

After finishing film school in Australia, James Wan and Leigh Whannell started working on their script for the first Saw film. Planning to finance the film themselves, they opted for the rather minimalistic idea of having only a contained set with as few actors as possible. However, during the script's development, it became apparent that they did not have sufficient funds to shoot the film independently.

A producer in Sydney optioned the script for a year, but the deal eventually fell through. After other failed attempts to get the screenplay produced in Australia from 2001 to 2002, literary agent Ken Greenblat read the script and suggested they travel to Los Angeles, where they had better chances of finding a studio interested in their concept. Wan and Whannell initially refused due to a lack of travel funds, but the pair's agent, Stacey Testro, convinced them to go. To help studios take an interest in the script, Whannell provided $5,000 to make a short film based on the scene of Amanda Young's interrogation, which they thought would prove most effective. Whannell played David, a hospital orderly tested by Jigsaw. Working at the Australian Broadcasting Corporation, Whannell and Wan had connections to camera operators who were willing to provide technical assistance for the short film. Wan shot the short movie with a 16mm camera within two days and transferred the footage to DVDs to ship along with the script. Whannell wanted to play the lead character in the feature film, while Wan intended to be the director.

Eventually, the short film and the script attracted the attention of Oren Koules, Gregg Hoffman, and Mark Burg, who worked as producers for Twisted Pictures. As they were fascinated with the film's concept, they decided to produce it, with Whannell playing the leading role of Adam while Wan directed the film. The film was granted a production budget between $1 million and $1.2 million. On September 22, 2003, the principal photography started at the Lacy Street Production Center in Los Angeles and lasted 18 days. The bathroom was the only set that had to be built. Danny Glover completed his scenes within two days. Due to the tight shooting schedule, Wan could not shoot more than a couple of takes per actor. Wan found he did not have enough shots or takes to work with during post-production as he was mainly shooting rehearsals. With many missing gaps in the final product, he and editor Kevin Greutert created shots to mend together during editing.

Lions Gate Entertainment picked up worldwide distribution rights for Saw when the films were shown at the Sundance Film Festival, only days before the film premiered on January 19, 2004. It was the closing film at the Toronto International Film Festival on September 18, 2004. Lionsgate initially planned to release the movie direct-to-video, but due to the positive reaction at Sundance, they chose to release it theatrically on Halloween.

The film initially received an NC-17 rating by the Motion Picture Association of America for its graphic depiction of violence. However, it was eventually released with an R-rating after being re-edited. It was released on October 1, 2004, in the United Kingdom, on October 29, 2004, in the United States, and on December 2, 2004, in Australia. In addition, Lionsgate held the first annual "Give Til It Hurts" blood drive for the Red Cross and collected 4,249 pints of blood.

The theatrical version of the film was released on VHS and DVD on February 15, 2005, in the United States. After its first week, it earned $9.4 million in DVD rentals and $1.7 million in VHS rentals, making it the top rental of the week. A two-disc "Uncut Edition" was released on October 18, 2005, to tie in with the release of Saw II. The original short film, also titled Saw, was included on the DVD.

The film was subsequently included in a boxed set with all six sequels entitled Saw: The Complete Movie Collection. The box was released in September 2014 to celebrate the film's 10th anniversary. It contained the unrated editions of the first seven films, though it lacked any unique features from previous releases.

Saw was a financial success. Shot on a meager budget of about $1.2 million, it made over $55 million at the box office in the US alone and $102,917,772 worldwide. It received a rating of 48% from Rotten Tomatoes, based on 181 reviews, while Metacritic gave it a score of 46 out of 100, based on 32 critics. Generally, the critical reactions to the film were mixed. Most of the criticism regarded the general plot and the ending, which were considered "convoluted."

Composer Charlie Clouser completed the film's soundtrack within six weeks. Other songs were performed by Front Line Assembly, Fear Factory, Enemy, Pitbull Daycare, and Psycho Pumps. In addition, Megadeth's song "Die Dead Enough" was set to be featured in the film but was not used for undisclosed reasons. The soundtrack was released on October 5, 2004, by Koch Records.

4. You Make Me Feel So Dead – Pitbull Daycare 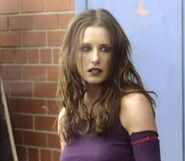 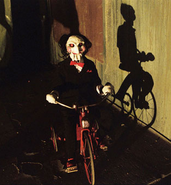