Active
Michael Spierig is a German-born Australian film director, producer and screenwriter, best know for working with his twin brother, Peter Spierig, on Predestination and Daybreakers.

He was one of the directors of Jigsaw.

Peter and Michael Spierig were born on April 29, 1976 in Buchholz, Germany to parents John and Marianne Spierig. The identical twins were four years old when their parents decided to move to Sydney, Australia, where they spent their childhood. The family then moved to Brisbane in the late 80s, where the twins continued their high school and university education. Both Peter and Michael earned their Bachelor's Degree from Queensland College of Art, where Michael majored in Graphic design and Peter in film and television.

When they were children, Peter and Michael developed a fascination with filmmaking after discovering their father's video camera at the age of 10. They directed their first short film at the age of 12, which mainly consisted of blowing up teddy bears in their backyard using fireworks.

Throughout high school and college, the twins kept directing short films, many of which were featured in local film festivals and film awards ceremonies. The twins earned over 15 different awards for their short films. Their work eventually caught the attention of Queensland's foremost commercial director Dick Marks, who subsequently hired the brothers to direct television commercials. Peter and Michael ended up jointly directing over sixty television commercials for a large list of clients, including Coke, Universal, Myer, Lend Lease, Energex, and Telstra.

While working in the advertising industry, Peter and Michael continued to write and direct short films. Their final short film The Big Picture went on to screen and won awards at several prestigious national and international film festivals, including Rotterdam International Film Festival. After making over 15 short films and dozens of television commercials, the brothers finally ventured into feature film production in early 2000.

Peter and Michael created their first film, Nightbreakers - The Undead, a low-budget zombie horror-comedy film, after they agreed on pooling together their life savings. The Undead screened at 17 film festivals, including Edinburgh, Montreal, Toronto, Sitges, Berlin, Amsterdam and Puchon. At the Melbourne International Film Festival, the International Federation of Film Critics awarded The Undead the prestigious Fipresci Award. The film was sold to 41 countries and was released in the US and Canada by Lions Gate Entertainment, who developed a close relationship with Peter and Michael and backed their second production Daybreakers.

The Spierig brothers's third film was the action sci-fi thriller Predestination, based on the science fiction short story All You Zombies by Robert A. Heinlein. The film starred Ethan Hawke and Sarah Snook and included an appearance by Noah Taylor. The story recounted that of a detective from a covert government agency, who embarks on an intricate series of time-travel journeys in order to catch a master criminal and ensure his own existence. After its premiere at SXSW on 8 March 2014, the film received many positive reviews including Variety, The Guardian and IGN Movies. The film was released later that year.

In 2016, the brothers directed Jigsaw, the eighth installment of the popular Saw franchise and the first one after a seven-year hiatus. It was released on October 27, 2017. 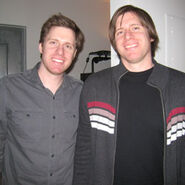