Inactive
Marcus Dunstan (born September 19, 1975) is an American screenwriter, producer, and director, best known for his work on Feast, The Collector, and the Saw franchise.

He was one of the screenwriters of Saw IV, Saw V, Saw VI, and Saw 3D.

Marcus Dunstan was born in Macomb, Illinois. He spent his formative years working in movie theaters and studying film at the University of Iowa. While in college, Dunstan experimented with 16mm film, often using himself as the guinea pig in poorly executed stunts that left him dragging behind a car, the target of flying knives, and thrice being set on fire. Since moving to Los Angeles in 1999, Dunstan toiled in several odd jobs, including a retirement home, an optometry clinic, and a video store, while spending his nights writing on a borrowed computer from fellow screenwriter, Patrick Melton.

In 2005, Dunstan won the third season of Project Greenlight, along with Melton and John Gulager. The TV show premiered on Bravo and resulted in the creation of the horror/comedy film Feast. Following its success, Melton and Dunstan were responsible for writing the screenplay for two sequels, Feast 2: Sloppy Seconds and Feast III: The Happy Finish.

From 2007 to 2010, Dunstan wrote the screenplays for Saw IV, Saw V, Saw VI, and Saw 3D. In addition to writing the script for The Collector, he directed the film. He also helmed the sequel titled The Collection. The film, produced by Liddell Entertainment and Fortress Features, was released in 2012.

In addition to writing and directing, he and his writing partner Patrick Melton have made cameo appearances in Saw V, Supergator, Feast, and The Collector, appearing in the latter two through the same puppet show clip shown on TV screens.

On October 5, 2011, Melton's debut novel, Black Light, co-written with Marcus Dunstan and Stephen Romano, was released by Mulholland Books. It was later adapted into a film for producer Michael De Luca.

In June 2013, Melton and Dunstan sold a sci-fi pitch titled Outliers to 20th Century Fox. The movie was directed by David Karlak and produced by Peter Chernin. In 2015, Melton and Dunstan wrote the screenplay for the eleventh film in the popular Halloween franchise, which was initially planned to be released in 2015 under the direction of Patrick Lussier. In October 2016, Melton and Dunsten were selected to write for the adaptation of Brandon Sanderson's The Way of Kings. 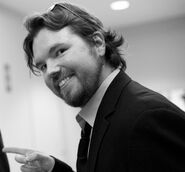