She played Anna in Jigsaw.

Laura Vandervoort was born and raised in Toronto, Ontario, Canada. She is the daughter of a Dutch father and a Canadian mother. In the first weeks of her life, Vandervoort contracted meningitis, resulting in a severe sickness that lasted a few months. Her parents were told she was not going to survive. Growing up, Vandervoort was involved in several sports such as football, karate, basketball, tennis, gymnastics, and baseball. Furthermore, she attended York University, where she studied Psychology and English. She has a sister named Sarah and is related to Canadian actor Gordon Pinsent.

Vandervoort started her career at the age of 13. After taking several classes and doing background work on Canadian shows such as Road to Avonlea and Harriet the Spy, she got her first speaking role in the Canadian children's series Goosebumps and Are You Afraid of the Dark?.

After commercials and guest-starring roles in Mutant X, Prom Queen: The Marc Hall Story, Goosebumps, Twice in a Lifetime, Doc, Sue Thomas: F.B.Eye, Troubled Waters, The Dresden Files, Mom's Got a Date with a Vampire, and Alley Cats Strike, she landed a lead role as Sadie Harrison on the CTV teen drama Instant Star, which ran for four seasons.

In 2006, Vandervoort shot her first feature titled The Lookout with Jeff Daniels, Joseph Gordon-Levitt, Matthew Goode, and Isla Fisher. Several other TV appearances such as CSI: Crime Scene Investigation led Vandervoort to the role of Clark Kent's Kryptonian cousin "Kara Kent," the woman destined to become Supergirl, on The CW serial drama Smallville. She was a regular in season seven and appeared in the episode Bloodline in the eighth season. She then returned for another two episodes in the tenth and final season of the series.

Following Smallville, Vandervoort shot the sequel to the feature film Into the Blue titled Into the Blue 2: The Reef. After that, she filmed an independent production titled The Jazzman, which also starred Canadian stars Michael Ironside and Corey Sevier.

In 2009, Vandervoort portrayed "Lisa," an extraterrestrial Visitor, in the ABC science fiction series V, a reboot of the 1980s science-fiction franchise of the same name. In 2010, she appeared in the two-part miniseries Riverworld, in which she played Jessie Machalan, the fiancée of war correspondent Matt Ellman, who wakes up after death on a planet populated by everyone who has ever lived on Earth. The following year, she starred in the thriller The Entitled, alongside Ray Liotta and Kevin Zegers.

In October 2011, she posed for PETA as part of the "Exotic Skins" campaign, and in 2014, she appeared nude again for an ad that protested against the keeping of marine mammals in captivity. In 2012, she had a small role in Seth MacFarlane's hit comedy film Ted, playing Mark Wahlberg's coworker Tanya.

In 2014, she appeared in the TV adaptation of the Kelley Armstrong novel Bitten, which premiered on January 13, 2014. In 2016, Vandervoort appeared as the supervillain Indigo/Brainiac 8 in three episodes of the first season of the CBS action-adventure series Supergirl. The next year, she landed the role of Anna in Jigsaw, the eighth installment of the Saw franchise. 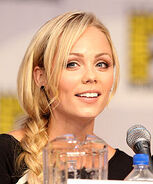 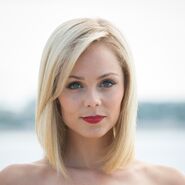