Luís Ferreira was born on February 20, 1966, in Terceira, Azores, and emigrated with his parents to Canada early in his life. He grew up in North York, Ontario. He went by the stage name Justin Louis for 25 years until his Portuguese-born mother died in 2008, after which he decided to use his family name and "Louis," an approximation of his given name, "Luís."

Ferreira's resumé includes over 100 different on-screen credits as he has appeared on a broad range of television shows, including lead roles in Hidden Hills, Durham County, Urban Angel, and 1-800-Missing. He has also played recurring or guest roles in various TV shows, including NCIS, CSI: Crime Scene Investigation, and Criminal Minds. After playing the recurring characters of Declan in the fifth season of the popular TV series Breaking Bad and Colonel Henderson Hall in Primeval: New World, he also starred in the CTV series Motive as homicide detective Oscar Vega with recurring roles in The Romeo Section and This Life. He also hosted the television series Letters to God.

In 2009, Ferreira was featured as David Maysles in the HBO award-winning film Grey Gardens, opposite Jessica Lange and Drew Barrymore. Other film credits include his portrayal of Sarah Polley's husband in Dawn of the Dead as well as roles in Shooter and The Lazarus Child. Ferreira played the role of Earl in the 1995 film Blood and Donuts and appeared in Saw IV in 2007. Further credits include The Marsh, Boozecan, and The Big Slice. He also portrayed Donald Trump in Trump Unauthorized and was a starring cast member in the miniseries The Andromeda Strain.

In 2011, he became known as "The Voice of Mazda," voicing a series of commercials for their national campaign for two years. Other voice-over work includes Police Officer Vince in the TV series The Dating Guy and Chet in the episode Hyde and Go Shriek in the animated children's series Tales from the Cryptkeeper.

Ferreira won the Best Actor Award for his portrayal of Robert Romano in Fallen Arches at the Chicago Alt. Film Fest in 1999. In 2008, he won the Gemini Award for Best Performance by an Actor in a Continuing Leading Dramatic Role for his portrayal of serial killer Ray Prager in Durham County. He was nominated for the same award in 2010 for the role of Colonel Everett Young in the TV series Stargate Universe. He won the Leo Award for Best Lead Performance by a Male in a Dramatic Series in 2014 and 2015 and was nominated for the same Leo Award in 2016. 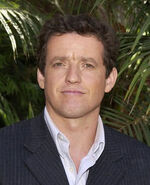 Retrieved from "https://sawfilms.fandom.com/wiki/Justin_Louis?oldid=57683"
Community content is available under CC-BY-SA unless otherwise noted.