He played Troy in Saw III and Saw IV.

J. Larose was born in Chicago, Illinois. Throughout his career as an actor, which began with a small role in an episode of the TV miniseries From the Earth to the Moon in 1998, he has worked with director Darren Lynn Bousman on several projects, mostly in the genre of horror. In he played the lead roles in Butterfly Dreams in 2000 and Identity Lost in 2001. Another one of his roles was that of Pavi in Bousman's short film Repo! The Genetic Opera in 2006, which the latter used to promote himself as a director to Lionsgate Films. When Bousman later worked on Saw III the same year, Larose played the role of Troy and reprised his role in a short cameo appearance in Saw IV the following year. Afterwards, Bousman directed a full-length feature film version of Repo! The Genetic Opera, in which J. Larose played a Vanity and Vein reporter, who interviews Rotti Largo about Zydrate addiction. LaRose also played The Major in The Devil's Carnival from Darren Lynn Bousman and Terrance Zdunich. 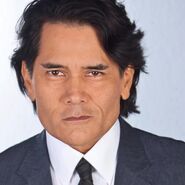 Retrieved from "https://sawfilms.fandom.com/wiki/J._Larose?oldid=52382"
Community content is available under CC-BY-SA unless otherwise noted.