He was one of the producers of Saw and Saw II.

Gregg Hoffman was born in Phoenix, Arizona. He studied communications, law, and economics at American University in Washington, D.C. Hoffman worked on Saw III and other films for Twisted Pictures when he died in a hospital in Hollywood, California, of natural causes. He was 42 years old at his death. The movie Dead Silence in 2007 was dedicated to him. He was also thanked in the film Gross Misconduct, mentioned as dedicatee for Saw III, and posthumously credited with producing the Saw films since 2007. 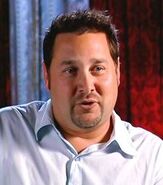