Inactive
Franky G (born October 30, 1965), is a Puerto Rican-American film and television actor, best known for his appearances in the 2003 remake of The Italian Job and the Saw franchise, as well as other various roles such as Lupus in Confidence and Detective Cruz in Wonderland.

He played Xavier Chavez in Saw II and Saw III.

Frank Gonzalez's parents moved from Puerto Rico to Williamsburg, Brooklyn, New York City. Gonzales was born in the borough of Brooklyn and later moved to the borough of Queens. Before acting, he played semi-professional football and worked as a bouncer and security guard in New York clubs. He studied criminal law in college.

Gonzales replied to an ad for Manito in Backstage magazine. Three weeks later, he was called to read the script for director Eric Eason. The film was played in 50 festivals in 2002. The following year, Gonzales was cast at the last minute for the role of Wrench in The Italian Job. In 2005, he played Jonny Calvo in the short-lived Fox Network television show Jonny Zero and Xavier Chavez in the horror film Saw II. 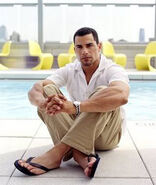 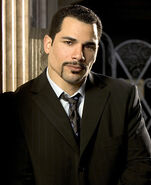