Inactive
Costas Mandylor (born Costas Theodosopoulos; September 3, 1965) is an Australian actor of Greek heritage, best known for his role as Kenny in Picket Fences, and his role in the Saw franchise.

Costas Mandylor was born in Melbourne, Victoria, Australia, under the name Costas Theodosopoulos, the son of Louise and Yannis Theodosopoulos, a taxi driver. Mandylor took a version of his mother's maiden name, Mandylaris, citing his real name in Greek being too long. He grew up in St. Kilda and South Melbourne. In 1987, he moved to the United States, where he started taking acting lessons. He was initially unable to find any acting jobs and had to take any job available.

Mandylor's first major role was in the 1989 film Triumph of the Spirit as an European Jew, which was filmed at the Auschwitz-Birkenau death camp. He returned to Los Angeles, where he met director Oliver Stone. He auditioned and ultimately got the role of an Italian count in The Doors in 1991. Mandylor landed a leading role in Mobsters, playing Mafia boss Frank Costello. He went mentally prepared for the role, telling the Los Angeles Times, "It was interesting that I got that part, because I felt tuned in to gangsters, it was a genre I'd read a lot. When I was 13, I got a job as a dishwasher in a Melbourne nightclub and saw everything there, real gangsters, and had met characters who were dangerous people from an underground world." In 1992, he had a leading role on the CBS television drama Picket Fences as Officer Kenny Lacos until the show ended in 1996.

Mandylor played professional soccer in Europe until suffering shin splints. In 1991, he was chosen by the People magazine as one of the "50 Most Beautiful People in the world". Mandylor married Talisa Soto in May 1997. They divorced in 2000. His brother, Louis Mandylor, is also an actor. 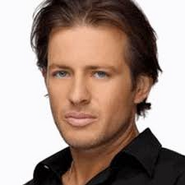 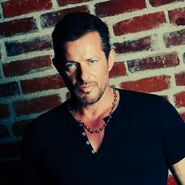