Inactive
Chester Charles Bennington (March 20, 1976 – July 20, 2017) was an American musician, singer-songwriter and actor. He was best known as the lead vocalist and songwriter of the rock band Linkin Park.

He played Evan in Saw 3D.

Chester Charles Bennington was born on March 20, 1976, in Phoenix. His mother, Susan Elaine, was a nurse, while his father, Lee Russell Bennington, was a police detective. Bennington took interest in music at a young age, citing bands Depeche Mode and Stone Temple Pilots as his earliest inspirations, and dreamed of becoming a member of Stone Temple Pilots, which he later achieved.

Bennington's parents divorced when he was 11 years old and his father gained custody of him. Following the divorce, Bennington started abusing various drugs, such as marijuana, alcohol, opium, cocaine, methamphetamine and LSD. However, he eventually managed to overcome his addiction.

Bennington first began singing with a band called Sean Dowdell and His Friends. They released an eponymous three-track cassette in 1993. Later, Sean Dowdell and Bennington moved on to form a new band, Grey Daze, a post-grunge band from Phoenix, Arizona. The band recorded three albums: Demo in 1993, Wake/Me in 1994, and ...no sun today in 1997. Bennington left Grey Daze in 1998, but struggled to find another band.

Therefore, Bennington was frustrated and almost ready to quit his musical career altogether when Jeff Blue, the vice president of A&R at Zomba Music in Los Angeles, offered him an audition with the future members of Linkin Park. Bennington quit his day job at a digital services firm and took his family to California, where he had a successful audition with Linkin Park, who were then called Xero. He managed to record the song for his audition in a day, missing his own birthday celebration in the process. Bennington and Mike Shinoda, the band's other vocalist, made significant progress together, but failed to find a record deal. After facing numerous rejections, Jeff Blue, now a vice president of A&R at Warner Bros., intervened again to help the band sign with Warner Bros. Records.

On October 24, 2000, Linkin Park released their debut album, Hybrid Theory, through Warner Bros. Records. Bennington and Shinoda wrote the lyrics to based on some early material. Shinoda characterized the lyrics as interpretations of universal feelings, emotions and experiences and as "everyday emotions you talk about and think about." Bennington later described the songwriting experience to Rolling Stone magazine in early 2002: "It's easy to fall into that thing – 'poor, poor me', that's where songs like "Crawling" come from: I can't take myself. But that song is about taking responsibility for your actions. I don't say 'you' at any point. It's about how I'm the reason that I feel this way. There's something inside me that pulls me down."

Bennington primarily served as Linkin Park's lead vocalist, but occasionally shared the role with Shinoda. All Music Guide described Bennington's vocals as "higher-pitched" and "emotional", in contrast to Shinoda's hip-hop-style delivery. Both members also worked together to write lyrics for the band's songs.

In February 2013, Stone Temple Pilots parted ways with their long-time lead singer Scott Weiland. The band recruited Bennington to replace Weiland in May 2013. On May 18, 2013, Bennington took the stage at KROQ's Weenie Roast with the band. The setlist included original Stone Temple Pilots songs, as well as their first single with Bennington on vocals called "Out of Time", which debuted on May 19 and was available for free download. It was later announced by Chester and the band in an exclusive KROQ interview that he was officially the new frontman of Stone Temple Pilots and discussed the possibility of a new album and tour. On May 19, 2013, the band released a free download of their first single, "Out of Time", that features Bennington via their official website. The song was featured on their EP High Rise, which was released on October 8, 2013.

Bennington reflected on joining Stone Temple Pilots, stating "Every band has its own kind of vibe. Stone Temple Pilots has this sexier, more classic rock feel to it. Linkin Park is a very modern, very tech-heavy type of band. I grew up listening to these guys. When this opportunity came up, it was just like a no-brainer." Bennington stated in interviews that singing lead vocals in Stone Temple Pilots was his lifelong dream. He eventually left the band on good terms in 2015 due to his commitments with Linkin Park.

On May 12, 1996, Bennington's first child, Jaime, was born from his relationship with his former girlfriend Elka Brand. In 2006, he also adopted Brand's other son, Isaiah. He married his first wife, Samantha Marie Olit, on October 31, 1996. Together, they had one child, Draven Sebastian, who was born on April 19, 2002. Bennington's relationship with his first wife declined during his early years with Linkin Park, resulting in their divorce in 2005. In 2006, he married Talinda Ann Bentley, a former Playboy model, with whom he had three children: Tyler Lee Bennington, born in March 2006, and the twins Lilly and Lila, born in March 2011.

Bennington and his wife were harassed by a cyberstalker named Devon Townsend for almost a year. Townsend was found guilty of tampering with the couple's email, as well as sending threatening messages, and was later sentenced to two years in prison.

Bennington was a tattoo enthusiast. He had done work and promotions with Club Tattoo, a tattoo parlor in Tempe, Arizona. Club Tattoo is owned by Sean Dowdell, Bennington's friend since high school. They played together in two bands.

Over the course of his career, Bennington suffered several diseases and injuries, which often affected his band as well. During the making of "Meteora", Bennington was plagued with poor health and struggled to attend some of the album's recording sessions. In the summer of 2003, he began to suffer from extreme abdominal pain and gastrointestinal issues while filming the music video for "Numb" in Prague. He was forced to return to the United States for surgery and filmed the remainder of the music video in Los Angeles.

In October 2007, he sustained a wrist injury while attempting to jump off a platform during a show in Melbourne at the Rod Laver Arena. Despite the injury, he continued to perform the entire show with a broken wrist, before heading to the emergency room. He received five stitches.

In 2011, Bennington fell ill again and Linkin Park was forced to cancel three shows and reschedule two from the A Thousand Suns World Tour. Bennington injured his shoulder during the band's tour in Asia and was advised by doctors to have immediate surgery, cancelling their final show at Pensacola Beach, Florida, and thereby ending their tour.

Bennington injured his ankle in January 2015 during a basketball game. He attempted to cope with the injury and perform with the aid of crutches and a knee scooter. Linkin Park later canceled the remainder of their tour to allow Bennington to undergo surgery and recover.

On July 20, 2017, Bennington committed suicide by hanging at his home in Palos Verdes Estates, California, where he was later discovered by his housekeeper. Mike Shinoda confirmed his death on Twitter, writing: "Shocked and heartbroken, but it's true. An official statement will come out as soon as we have one." On July 21, Brian Elias, the chief of operations for the office of the medical examiner-coroner, confirmed that a half-full bottle of alcohol was found at the scene, but no other drugs were present. The band announced that they had canceled the North American leg of their One More Light Tour following Bennington's death and that tickets would be refunded.

Bennington's death occurred on what would have been Chris Cornell's 53rd birthday. Cornell, who was a close friend of Bennington, had also died of suicide by hanging two months earlier. Shinoda noted that Bennington was very emotional when the band performed "One More Light" in his honor, where he could not finish singing the song, be it in rehearsal or in a live performance setting. Bennington sang Leonard Cohen's song "Hallelujah" at Cornell's funeral. He was also the godfather of Cornell's son, Christopher.

Bennington's funeral was held at South Coast Botanic Garden in Palos Verdes, California, on July 29. In addition to his family members and close friends, many musicians who toured or played with Linkin Park were in attendance as well. The service also included a full stage for musical tributes. 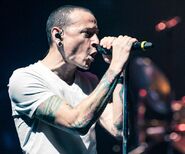 Retrieved from "https://sawfilms.fandom.com/wiki/Chester_Bennington?oldid=54662"
Community content is available under CC-BY-SA unless otherwise noted.