Inactive
Athena Karkanis is a Canadian actress of Greek and Egyptian heritage, known for her performances and voice acting in several films, and numerous video games.

Athena Karkanis was born in Alberta and raised in Toronto, Canada in 1982 or 1983. She attended McGill University in Montreal, Quebec and also planned on attending law school, but abandoned that path to pursue her passion for acting. In 2005, she made her screen debut in an episode of 1-800-Missing and later had a number of guest-starring, recurring and regular roles on Canadian television shows. She also had regular voice acting roles in Skyland, MetaJets, Wild Kratts, and Total Drama: Revenge of the Island.

Throughout her career, Karkanis co-starred in several horror films, including Saw IV, Repo! The Genetic Opera, Saw VI, Survival of the Dead and The Barrens. She also appeared in direct-to-video action films The Art of War II: Betrayal in 2008 and Sacrifice in 2011. On television, she was a regular cast member in the first season of Canadian teen drama The Best Years in 2007, in The Border from 2008 to 2010, and in the short-lived comedy series Almost Heroes in 2011. She also had a recurring role in Lost Girl from 2011 to 2012.

In 2013, Karkanis starred in the AMC drama series Low Winter Sun. The following year, she was casted as a series regular in the Lifetime post-apocalyptic drama series The Lottery. In 2015, she began playing the role of Octavia Muss on the critically acclaimed science fiction series The Expanse. 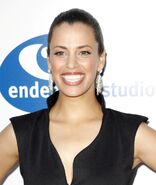 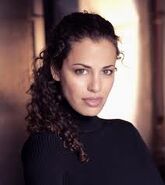 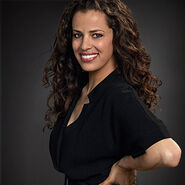