She played Carla in the first Saw film.

Alexandra left her birthplace of Pusan, South Korea, and immigrated to the United States when she was seven years old. After attending a boarding school in Maryland, she pursued a study in Western Philosophy at St. John's College, U. S. in Santa Fe, New Mexico. Intent on becoming a medical doctor after graduation, she entered a relationship with Ottmar Liebert in her senior year, which dramatically changed the course of her life to pursue the performing arts.

Shortly after moving to Los Angeles for an acting career in film, she was cast for a regular role on the soap, Another World, which drove her to New York City. When her contract ended with the soap opera, she returned to Los Angeles to work in numerous film and television shows. She has played recurring and guest-starring roles in dozens of shows, including Lax, Jag, House, The Ghost Whisperer, and as a recurring villainess on NBC's The Event. She has also played numerous roles in feature films, both in the U.S. and in Korea, including Carla in the original hit horror film, Saw. In 2013, she starred in Innocent Blood, an indie suspense thriller, playing a mother hell-bent on retrieving her kidnapped son, for which she earned an Acting Award at the Monaco Film Festival. Her theater credits include L.A. Women's Shakespeare Company's A Midsummer Night's Dream, Blue Sphere Alliance's Nagasaki Dust, SoHo Rep's Legendary Sirens, Lodestone's productions of Laughter, Joy, Loneliness, and Sex and Sex and Terminus Americana, Japan American Theatre's Reds, Whites, and Blues, among others. Her most recent theatrical turn had her playing alongside other international award-winning actresses in Carry the World at the Los Angeles Museum of Tolerance.

In 1999, along with three other theater professionals, she founded and co-artistic directed a theater company called Lodestone Theatre Ensemble. In the Fall of 2004, as writer, director, and producer, Alexandra Chun launched a website of private short films that take place in hotel rooms. It was her exploration of the "viewer as voyeur" phenomenon of the internet.

On July 25, 2016, Alexandra Chun returned to her birthplace, South Korea, to protest against the torture and slaughter of dogs in the Asian Dog Meat Trade. She returned to the United States with three dogs rescued from slaughter. 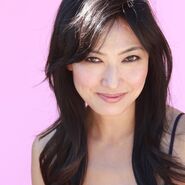 Retrieved from "https://sawfilms.fandom.com/wiki/Alexandra_Bokyun_Chun?oldid=60626"
Community content is available under CC-BY-SA unless otherwise noted.